Below is from Wikipedia:

"The Charleston church shooting (also known as the Charleston church massacre) was a mass shooting that took place at Emanuel African Methodist Episcopal Church in downtown Charleston, South Carolina, United States, on the evening of June 17, 2015. During a prayer service, nine people were killed by a gunman, including the senior pastor, state senator Clementa C. Pinckney; a tenth victim survived. The morning after the attack, police arrested a suspect, later identified as 21-year-old Dylann Roof, in Shelby, North Carolina. Roof later confessed that he committed the shooting in hopes of igniting a race war."

I talked about this article by Peggy McIntosh before:
White Privilege: Unpacking the Invisible Knapsack: Knapsack.pdf

I heard from some People of Color that they could not relate to anything on Peggy's list. They said they never experience they have any of those privileges.

They said they wanted these 5 things:

I went back over the list of 50 items on the list by Peggy, and found that all of them can fall under those 5 freedoms. So that is simple enough right? Can't we give People of Color, and everyone including Muslims, those 5 freedoms?

This is from Wikipedia:

"The shooting of Walter Scott occurred on April 4, 2015, in North Charleston, South Carolina, following a daytime traffic stop for a non-functioning brake light. Scott, a black man, was fatally shot by Michael Slager, a white North Charleston police officer. Slager was charged with murder after a video surfaced contradicting his police report. The video showed him shooting the unarmed Scott from behind while Scott was fleeing."

It looks like this police officer might be brought to justice, but he is out on bail, able to be free for 10 months before trial in Oct. 2016. That doesn't seem just.

Resolve to Do Your Part to Dismantle White Supremacy

This blog post is by Monica Raye Simpson from huffingtonpost.com:

A Challenge to White Allies in the New Year: Resolve to Do Your Part to Dismantle White Supremacy


This post was helpful to read and be reminded of.  It gives us some specific actions to take. Link to her post above for more details about above and why!

Posted by dag4change at 3:20 PM No comments:

This is from this link: The Guardian: Are you racist? 'No' isn't a good enough answer: by Marlon James

"Most of us, says Marlon James, are non-racist. While that leaves us with a clear conscience, he argues, it does nothing to help fight injustice in the world. In fact, we can pull off being non-racist by being asleep in bed while black men are killed by police. We need to stop being non-racist, and start being anti-racist."

The link to the 2 minute video is above.

Posted by dag4change at 3:09 PM No comments:

This is from CREDO Action:

"In 2013, the right-wing ideologues on the Supreme Court handed down a shameful decision that gutted the Voting Rights Act, ending decades of protection for minorities against discriminatory and unfair attempts to limit voting on the basis of race."


I mentioned this in a November 2015 post: Selma and voting rights because I heard about it in Selma. I signed the petition. I hope you will too.

Posted by dag4change at 3:02 PM No comments:

I got a sign in my inbox from Showing Up for Racial Justice: 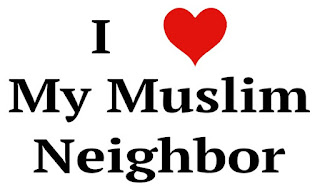 I put it on my front door. I do it to be public with my support of my Muslim "neighbors" in my community, my state, my country, and the 50 countries around the world where the Muslim faith is worshiped by the majority of people there. This is in response to a particularly rude and dangerous white man running for presidency of the United States. It is apparent he is a xenophobe.

Just because there are a some Muslim terrorists, extremists and murderers, doesn't mean all Muslims want to do harm to those of us who aren't Muslims. I have a new friend who is smart, kind, an active leader in my Knapsack Antiracism group, and a Muslim. She has read this post and given me some information I will share with you here. (C: her comments are noted below with this)

Here is a link that I appreciated watching: I’m Muslim, But I’m Not... I just watched it again. It brings tears to my eyes. Why is this not obvious to all of us that Muslims are like all of us...they just practice a different religion!

I went to a job training last week and learned about Muslims.
Here are some of my learnings (if you are Muslim and want to add or correct any of this, please do!):
-DG

Posted by dag4change at 9:09 AM No comments:

The next (4th) meeting (called: Antiracism in the 'Burbs)
will be Sunday: 2/21/16 2-4 p.m, location: Medfield, MA
(talk to me, or join www.meetup.com/Antiracists for location details -DG)

“Equality cannot be achieved under conditions of nearly complete separation...The primary goal must be a single society, in which every citizen will be free to live and work according to his capabilities and desires, not his color.” (from The Kerner Report, 1967)

This February meeting's topic:
Deeper exploration of anti-racism in the suburbs:

*What are some examples of covert and overt racism (in our own suburban communities)?

*What can we do on an individual and community level to oppose these ongoing problems that inhibit our community’s diversity and integration?

*How can we engage our neighbors in acting against some of the micro and macro forms of racism and oppression that continue today? What are barriers to doing this?

*Discuss a goal and plan for a nonviolent action/event we want to do as a group. We started this discussion during our January 2016 meeting.

Please feel free to read this article from The Atlantic: White Flight Never Ended
...and/or post additional ideas/articles that come to mind regarding racism in the suburbs, especially any recent current events.

Here is an online article that could be read (in addition to or instead of watching Selma) about the The Almost Forgotten Selma March.

More about this discussion series: the second meeting (I share my important learning from the People of Color who came as we discussed White Privilege), the first meeting about dominate white culture behaviors

Posted by dag4change at 8:35 AM No comments: