We should not burn sage and smudge sticks

“If you are not an Indigenous person and sage is not part of your cultural practices, stop buying it or using it!”
with this article: Poachers cash in on sage craze, imperiling the plant's survival for Native cultural needs
So she wrote this:
"Native Americans and other Indigenous peoples have burned sage for centuries as part of a spiritual ritual to cleanse a person or space, and to promote healing and wisdom. It's been used since the time of the ancient Egyptians and Romans to treat digestive issues, memory problems, and sore throats. White Sage, sometimes called Sacred Sage, is well-known for its usage for these purposes. Other common plants to smudge with include lavender, mugwort, tobacco, cedar, sweet grass, juniper, and copal. Today, we use Sage most often in a Clearing Ceremony or to Cleanse a space, such as when a new home is purchased or when you want to refresh the energy in your home or office." 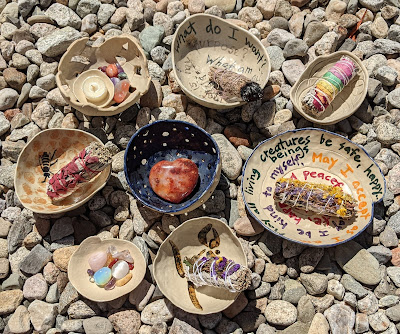 Have you advertised for the class yet? I don't see anything about it on your website.

I am connected to an Indigenous group in the area (UAINE.org) and below is what they posted this week. I'm concerned about doing the class (with a focus on sage smudge sticks) and being part of something harmful to Indigenous folks. Do you know the source of the sage in your smudge sticks?
I shared the link and “If you are not an Indigenous person and sage is not part of your cultural practices, stop buying it or using it!

The class is on Facebook. Let me look into sourcing. I will get back to you.

I see you didn't post until today, when I expressed my concern with the content. Since you don't have folks signed up yet, could we put a pause on this smudge-bowl-centric class, please? I want to discuss this with the Indigenous folks I know and see what they think. I can't decide for you what you will do in your store, but I don't want to be personally complicit since my community is asking for us to stop doing this practice.

It was on Facebook before I saw your concern. I always post 2-3 weeks ahead. Anyway, I will take it down. Let me know what you decide.

Would you be interested in doing a bowl class to hold stones and crystals? I could take a new picture without smudge sticks in them and we could use the same date and time. If you don't, I understand.

I won't be able to get back to you quickly about smudge sticks. I imagine and guess I wouldn't feel comfortable with doing that anyway. I should have gone with my instinct from the beginning. Someone in my Indigenous solidarity group wrote this:
"my understanding is smudging is an Indigenous practice that's been very widely appropriated by white ppl especially "New Age" types... certainly might be an incomplete understanding of smudging but my sense was it's something we shouldn't be doing period, regardless of the source of the sage/other bundle"

Sure, we can do one for crystals. Send the photo when you have it and I will write up a new description.

I need to think about if I still want to do a class there after all. I'll get back to you when I know more.

Thanks for your comment. Due to spam, we are moderating comments.