Pres. Obama got it approved to get Tubman 20's minted in 2020. The current U.S. president pushed the printing to 2026 or 2028. I joined the movement to not wait. I bought the stamp to help get more representation on our currency (a woman, a Person of Color, and an activist). Harriet Tubman represents what I believe in, not Andrew Jackson (a strong supporter of the removal of Native American tribes from U.S. territory east of the Mississippi River, Jackson began the process of forced relocation known as the "Trail of Tears.") 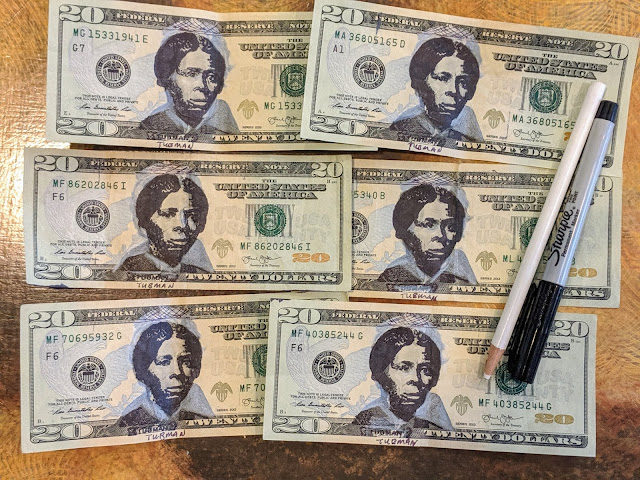 I bought my stamp from this site: tubmanstamp.com, getting the ink pad and extra ink too. I have needed to re ink the pad a few times, so I am glad I got the extra ink. I am stamping 20s for my family and friends too.

I use a white colored pencil to make Jackson's shoulders (and hair that still shows) lighter. Then I use a fine point Sharpie marker to complete the top border where Jackson's hair was, and write: "TUBMAN" at the bottom if the printing alignment wasn't accurate enough. The stamping process isn't perfect. But it is better than Jackson!


We checked with our bank, yes, they are legal tender.
One store my sister used it in did a test with a marker and accepted it as legal.
Sometimes folks won't take it, but we will keep trying to normalize the use of these so they will be readily accepted.

Here is research on legality of these 20s:


Here is info about this movement:
Note from 3/5/20:
I am considering not doing this anymore. I just read this article: https://www.bostonglobe.com/2020/02/14/nation/i-dont-want-harriet-tubman-credit-card-or-20-pay-homage-not-like-this/
I am so opposed to using currency with Jackson on it... based on what he did to Indigenous Peoples... that I like the Tubman option. But now not sure if stamping Harriet Tubman over his face is better...based on the points of that article.

Thanks for your comment. Due to spam, we are moderating comments.